In applications such as multiphoton fluorescence and second-harmonic-generation (SHG) imaging, a near-infrared laser with short pulses is used to excite the sample. The most common laser is a tunable, mode-locked Ti:Sapphire laser with pulses of about 100 femtosecond (fs) duration. Because nonlinear-optical effects are strongly dependent on the peak intensity of the laser pulse, the most efficient imaging occurs when pulse broadening – and the accompanying decrease in peak intensity – is kept to a minimum. For example, the higher the peak pulse intensity for a given pulse energy, the deeper into a sample it is possible to image.

Pulse broadening is caused by dispersion associated with the optics used to direct and focus the laser light onto the sample, including mirrors, lenses, and beamsplitters. It is always desirable to keep the dispersion of these components to a minimum. But, for the most demanding applications, additional optics are used to compensate the dispersion – in this case it is imperative that the dispersion of the system components be as smooth and slowly varying with wavelength as possible, regardless of the actual magnitude of the dispersion. 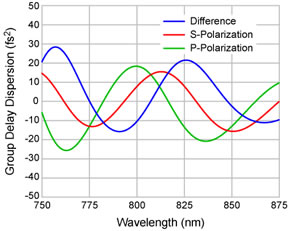 The FF720-SDi01 short-wave-pass beamsplitter is ideal for second-harmonic-generation (SHG) imaging using 810 nm excitation and observation of the SHG signal at 405 nm. In addition to its excellent dispersion properties for minimal pulse broadening, the polarization performance has been carefully designed to maintain linear polarization of both the reflected laser (excitation) beam and the transmitted signal beam for any rotational orientation.

Design spectra of the difference in phase shift associated with s- and p-polarized light are shown below for both light reflected off of (left) and transmitted through (right) the FF720-SDi01 beamsplitter. In both cases the phase shift difference is very low and slowly varying. 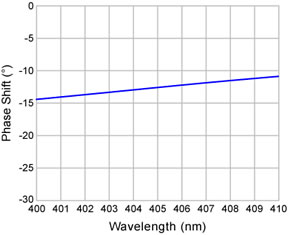 This small phase shift difference, coupled with the nearly identical s- and p-polarized light amplitude values for both reflection and transmission near 810 and 405 nm, respectively, mean that linearly polarized light incident on the filter maintains a very high degree of linearity after reflecting off of or transmitting through the filter. The plots below show how well the linearity is preserved, even for the more difficult case of reflection near 405 nm. The shaded region shows the range of output linearity ratios for all possible rotational orientations of linearly polarized input states of light. The highest output polarization ratio is for nearly perfect s- or p-polarized light input, while the lowest ratio occurs for an approximately equal input mix of s- and p-polarization. 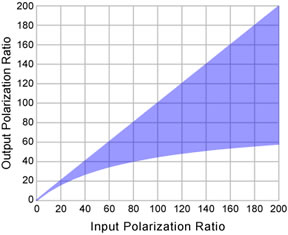 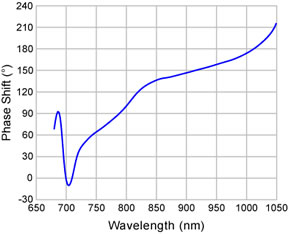