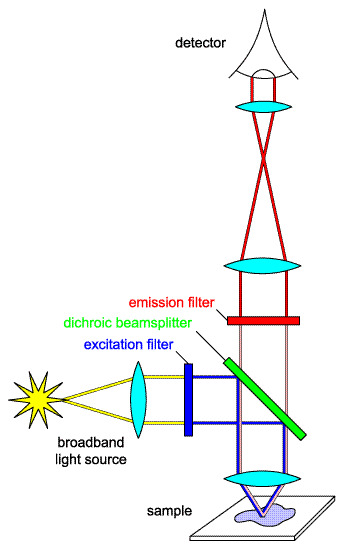 Optical fluorescence occurs when a molecule absorbs light at wavelengths within its absorption band, and then nearly instantaneously emits light at longer wavelengths within its emission band. For analytical purposes, strongly fluorescing molecules known as fluorophores are attached to biological molecules and other targets of interest to enable identification, quantification, and even real-time observation of biological and chemical activity.  Fluorescence is widely used in biotechnology and analytical applications due to its extraordinary sensitivity, high specificity, and simplicity.

Most fluorescence instruments, including fluorescence microscopes, are based on optical filters.  A typical system has three basic filters: an excitation filter (or exciter), a dichroic beamsplitter (or dichromatic mirror), and an emission filter (or barrier filter). The exciter is typically a bandpass filter that passes only the wavelengths absorbed by the fluorophore, thus minimizing excitation of other sources of fluorescence and blocking excitation light in the fluorescence emission band. The dichroic is an edge filter used at an oblique angle of incidence (typically 45°) to efficiently reflect light in the excitation band and to transmit light in the emission band. The emitter is typically a bandpass filter that passes only the wavelengths emitted by the fluorophore and blocks all undesired light outside this band – especially the excitation light. By blocking unwanted excitation energy (including UV and IR) or sample and system autofluorescence, optical filters ensure the darkest background.

Most Semrock filter sets are high-brightness and high-contrast sets. These filter sets strike a balance between highest possible brightness while maintaining high contrast and are the best choice of filters under standard imaging conditions.  In situations where the signal level from a sample is low, filter sets with wider passbands enable maximum signal collection efficiency.  That is why studies such as the imaging of single molecules typically utilize a filter set with a wide passband or a long pass emission filter.  For these studies, it is important to maintain very low background autofluorescence signal by utilizing strict sample preparation protocol.

Filter sets with narrower passbands are preferred options when imaging a sample labeled with multiple fluorophores. Narrower passbands reduce crosstalk by allowing only the strongest portion of the fluorophore emission spectrum to be transmitted, reduce autofluorescence noise and thus improve the signal-to-noise ratio in high background autofluorescence samples. Such filter sets are ideal for samples with ample fluorescent signal level.