Each member of the Avant™ Filter Set Family provides significant improvement in fluorescence performance for its corresponding short Stokes Shift fluorophore. Here’s the rationale behind this development, and how it was achieved.

A fluorescent filter set consists of the following:

Our ability to set the two passbands for best results depends on the Stokes Shift, the separation in nm between the peak excitation and peak emission wavelengths of the fluorophore. A number of very popular fluorescent probes have small Stokes Shifts, less than 3% of their wavelength. Though the excitation and emission passbands for these probes would normally be placed close together, this has historically not been the case.

Instead, one sees the more typical pattern for these short Stokes Shift fluorophores shown in Fig. 1. The so-called Gap between the long-wavelength excitation passband edge and the short-wavelength emitter passband edge is located quite asymmetrically with respect to the crossover point for the fluorophore, where the normalized excitation and emission curves cross.

This asymmetry pushes the emitter passband out to longer wavelengths, and the result is less emission light capture by the emission filter and reduced filter set performance. The Gap has been difficult to reduce for two reasons: (1) A decreased Gap results in higher levels of excitation light bleedthrough, i.e., excitation light reflected from the specimen plane into the emission filter, and (2) manufacturing variability limits our ability to place the two spectral edges in the narrow Gap without risking collision between the two filter edges at deeper OD.

Because this performance deficit holds for a number of popular fluorophores, there is systematic underperformance of corresponding filter sets over the industry. As IDEX Health & Science has recently made strides in improving our Semrock optical filter coating performance and metrology capabilities, we set out to improve the performance of filter sets for short Stokes Shift fluorophores. This has resulted in the Avant Filter Set Family.

Three steps were used to work around the limitations described above:

Recent key, proprietary advances at Semrock made this possible:

An example is shown in Fig. 2, which shows the modeled increase in fluorescence emission signal for the Cy5.5 fluorophore. 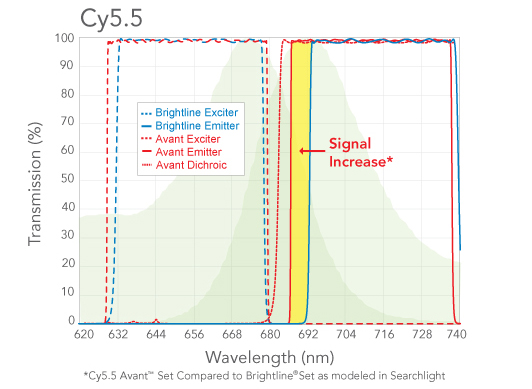 Modeling was performed using the SearchLight simulation tool using measured spectra of the new filter sets, summarized in the table below. The fluorescence improvement is significant, as shown in the rightmost column, and the excitation light bleedthrough (shown in the column to the left of the fluorescence percent increase) has been effectively eliminated.

Early results from a Semrock optical filter customer using Cy5.5 showed an increase of some 40% in fluorescence signal over background when the Cy5.5 Avant filter set was used in comparison to an incumbent filter set.