The ability to label multiple distinct objects of interest in a single sample is an important asset to fluorescence imaging. For a long time the only way to achieve high-quality images of such samples was to take multiple photographs while switching whole single-band filter cubes between photographs and then later combine these photographs electronically. Limitations to this approach included pixel shift among the multiple, single-color images and the speed with which a complete multi-color image could be captured.

While the problem of pixel shift can be eliminated with Semrock's BrightLine ZERO filter sets, the single-band filter cube approach, although slow, remains the best technique for achieving images with the highest contrast and lowest bleedthrough.  To satisfy the ever-increasing demand for high-speed imaging, especially for live-cell real-time analysis using fluorescent protein labels, there is a need for an alternative to the single-band filter cube approach without sacrificing image fidelity.  Recent advances in multiband optical filter technology have brought simultaneous multi-color imaging to a new level.

There are three types of multiband filter sets for simultaneous multi-color imaging. The "full-multiband" configuration uses a multiband exciter, emitter, and dichroic beamsplitter and is ideal for direct visualization, such as when locating areas of interest on a sample. This approach is quick and easy to implement and is compatible with all standard fluorescence microscopes, though it requires a color camera for electronic imaging and cannot eliminate fluorophore bleedthrough. The "Pinkel"configuration uses single-band exciters in a filter wheel with multiband emitter and dichroic filters, and offers an economical way to achieve very high-speed, high-contrast, simultaneous multi-color imaging. This approach is based on a monochrome CCD camera, which is less expensive and offers better noise performance than color cameras. While bleedthrough is reduced relative to the full-multiband approach, some bleedthrough is still possible since all emission bands are imaged simultaneously. The "Sedat" configuration uses single-band exciters and single-band emitters in synchronized filter wheels, with a multiband dichroic beamsplitter. This approach provides the best image fidelity for high-speed simultaneous multi-color imaging, though it requires a larger investment in system hardware. 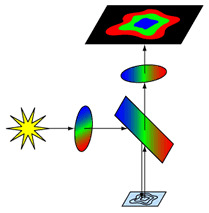 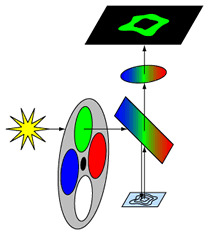 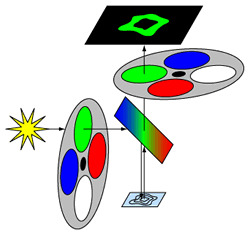 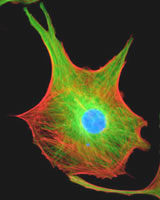 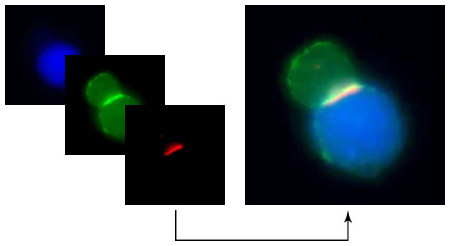